A birthday is that special day in the life of a person when he first enters the world, and as the person grows up, he remembers this wonderful day to give thanks to God for his accomplishments and take charge of the new year he is starting and all the years to come. It is in this joy that we joined our much beloved Director, Father Joseph KABADUGARITSE, on the 7th December 2020 .
The feast began with the evening mass celebrated by the vicar of Don Bosco Kabgayi, Father Augustin Cesar HABANABAKIZE with Father Rémy NSENGIYUMVA, Rango parish priest who gave a very good homily and a little testimony on what he knows about Father Joseph, the hero of the day. Also concelebrating were Father Joseph MLINARIC and Father Joseph KABADUGARITSE. After sharing the Body and Blood of Christ, all confreres as well as the guests went to the refectory to also share the bread and wine for our bodies.
Various presentations, gifts from people present and not present, speeches in his honor were prepared, including the speech of Abbé Emmanuel the rector of minor seminary ‘saint Leon le Grand de Kabgayi’. His speech was very short, so as to prevent guests from delaying getting home not later than 10 p.m to respect the government instructions to prevent corona virus from spreading. Father Director, read his biography accompanied with some short comments, and then he thanked each and every one who gave themselves so that that feast had been such a beautiful and good one. He closed the event with the blessing preceded by “Salve Regina”.
Apart from this big party, he had received many messages from different people since the morning of that day wishing him a happy birthday and a fruitful mission in the spirit of Don Bosco
We also wish Him many more years of life, hundred candles to celebrate his diamond jubilee (75). 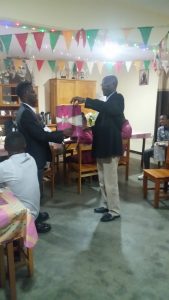 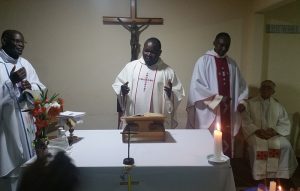