The Salesians of Don Bosco of the African Great Lakes Province, have expressed gratitude to Missio Belgique, for the donation of mountain bikes which will facilitate the transport of the Salesian seminarians from their hostel to the Major Seminary of Kabgayi where they are pursuing philosophy studies.
The gratitude was expressed on Friday September 25, 2020 at the Provincial House, after the handover of the bikes to Brother Diomède Havyarimana, Economer of Don Bosco Kabgayi.
“We are really happy and our students/seminarians will be very happy with these bikes. They will help them get to school easily and cheaply.” Havyarimana said.
In total, Brother Havyarimana received 9 bikes and they will be added to the existing ones also being utilized for the same purpose.
“These bikes are a good means of transport which will not harm the environment”, Brother Diomède said. “Motor bikes emit carbon dioxide and pollute the air. Mountain bikes do not harm the environment, moreover they allow the young Salesians to train their muscles”.
Missio Belgique belongs to a worldwide network of solidarity between Catholic communities and the Pontifical Mission Societies.
Missio supports concrete projects developed on site by parishes, communities of men and women religious, lay people committed to the service of the Church and of society.
Ange de la Victoire Dusabemungu 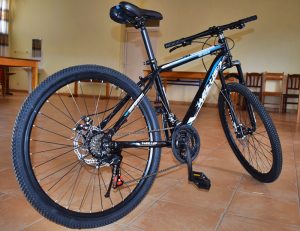 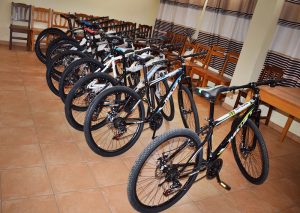