Celebrating the nativity of Jesus Christ in the Holy Land today is a grace. Getting to Bethlehem where Christ was born and having a look at the star that represents the spot of the grotto where he was born, the shepherds’ field where the shepherds received the message of the angel announcing the good news of his birth, the milk grotto, where according to tradition, while nursing Jesus, Mary’s milk spilled on the ground on the way to Egypt, are part of the great monuments in the Holy Land that bring back our memories to the birth of our Lord.
But in a country where Christians today count only 2% of the population in a Jewish State and the mostly Muslim populated West Bank, everyone would wish to know how it looks like to celebrate the birth of our Lord in the very land where he took on human flesh and became man.
Unlike other European cities and now even some African ones where Christmas decorations and music will welcome you to remind you of Christ’s birth, the cities of the Holy Land, most especially Jerusalem, share none of these signs with the only public Christmas tree in the whole city of Jerusalem found at the new gate in the Christian quarters of the old city.
However in Bethlehem it is a different story; celebrations go on for longer than we are used to. Indeed, rather than having one Christmas day, three are marked here. The Catholics lead processions along the traditional pilgrimage route from Jerusalem to the Nativity church ahead of their Christmas on 25 December. Then the attention switches to the Greek orthodox, who make up the majority of the Palestine Christians. Their Christmas falls on 7th January. What makes the situation in the Holy land really unusual is that the Armenians wait even longer for Christmas, they have to wait until 18th January.
On each Christmas Eve, Bethlehem gives a warm welcome to patriarchs and priests when they enter Manger Square. The people of Bethlehem are proud of the fact that the birth place of Jesus is here and consider themselves the oldest congregation in the world taking the celebrations seriously with Christmas decorations. As you enter Bethlehem, it is a festive mood that ushers you into the city of the Nativity of our Lord.
However this year, with the restrictions put up by the Israeli government on the pilgrims that usually flock the Holy land for the celebrations, and the lockdown proclaimed over the West bank until January 2 with only essential food shops and pharmacies left to function, due to the breakout of Covid-19, the celebrations this year are not having much of a festive mood, it’s all different. But for the locals and for the Christians already in the Holy Land, it’s an opportunity to have more time for prayer in these holy places which otherwise are hard to access for enough time of prayer due to the overwhelming numbers of pilgrims that are usually here. In spite of these challenges, the Christmas lights are lit already with a very good crib and a high Christmas tree in Manger’s Square showing that the celebrations are on and that Christ, the light of world is coming soon.
Henry Ssemakula, sdb 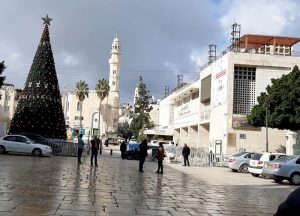 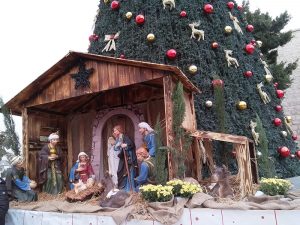 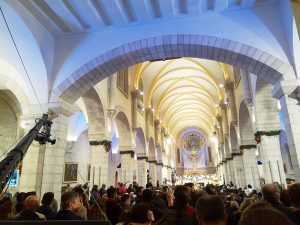 WHAT IT LOOKS LIKE TO CELEBRATE CHRISTMAS IN THE HOLY LAND.